When it comes to pedigree, we've got it to burn….

When researching for a quality Clydesdale Stallion to cover your mares always remember that a solid foundation is the most important part of a draft animal.  We live by the old saying "No Foot, No Horse!"  The Stallion you choose should always be "at least as good" as your mare.  You wouldn't want to take anything away from her during the breeding process.  Look for a Stallion with exceptional feet and ankle, clean legs, nice flat bone and an ample amount of it. I'm also going to be asking about an animals hocks.  Any lumps, bumps or previous surgeries.  Is he sound and how does he move?  You also want nice silky hair and a good slope to the shoulder.  A pretty face and a nice top line are usually the last things we look for in breeding prospects, but it is all part of a balanced picture.  Ask the right questions when you look for a sire.  What are the foot measurements barefoot from side to side is always my first question?  You should ask for pictures of the animal from the front, side and from behind and then ask for a video of him moving out.  Is he moving smooth behind?  Their behind action is just as important as knee action.  A lot of front action/movement can be manufactured with a good shoe job.

The stallions at Classic City Clydesdales are genetically and physically sound, with huge bare feet and plenty of bone.  We are proud of our stock and it shows in the offspring they produce. 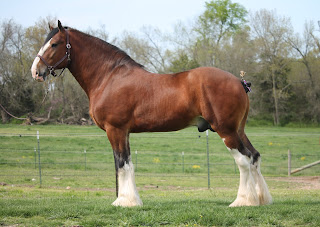 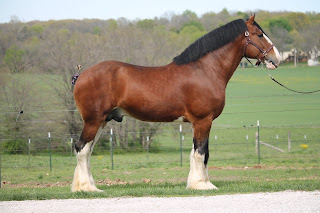 We are very happy to announce that our newest stallion at Classic City has been approved to ship! He can ship cool or frozen at this time.  We can also offer him to a couple outside mares here on the farm.

Footprint is an exceptional imported stallion from the renowned Thorpe Hill breeding stud in the UK.  The Bedford family is synonymous with quality Clydesdales and Shires and footprint epitomizes their produce.  We are so pleased to have him here in Georgia. We will also be bringing out a 2yr old colt from their exported stallion Thorpe Hill Royale this season.  He is equally as impressive.

If you are looking for a "hell of a foot" then this stud has it along with all the other attributes you want in a Clydesdale stallion.

We have a supply of frozen semen straws in storage for Bogton Barnaby.  We can discuss the purchase of these straws on a case by case basis.

Grand Champion Stallion winner in 4 different states (Indiana, Iowa, Pennsylvania, Michigan), Barney also won the senior stallion class at the US National Show and won the CBUSA All American Contest in 2009 and was Reserve All American 2007.

This impressive Scottish import stallion had just about everything you could hope for in a quality Clydesdale herd sire.  Not only did he wear a size 12 shoe, but his hair is just awe inspiring.  Imported as a youngster he stood at stud for 2S Clydesdales in Schulenburg TX.  Under the close supervision of Jim Westbrook he put a number of impressive babies on the ground, including our own Latch colt.  Barnaby's son Latch is beginning to produce the same quality offspring as his father.

Barney passed on beautiful big feet, size, hair and temperament.  His 2014 foal crop left little to be desired.  He produced 5 fillies and 2 stud colts that year and we were very pleased with all of them.

Barney's semen has successfully been frozen to insure that his genetics will stand the test of time. 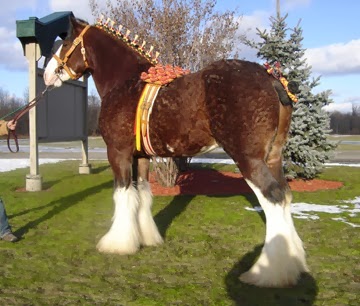 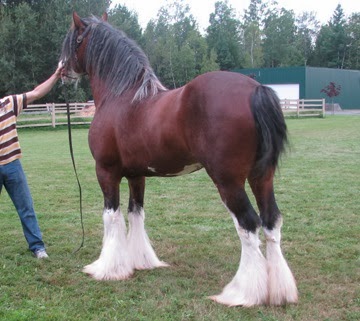 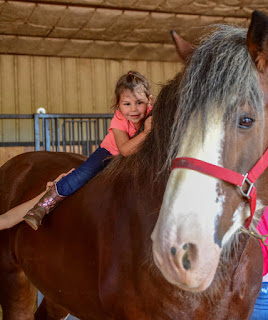 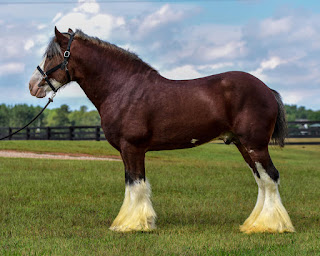 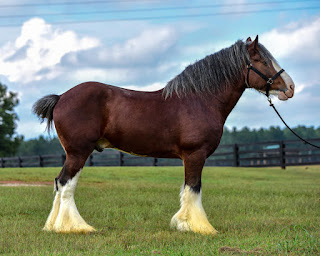 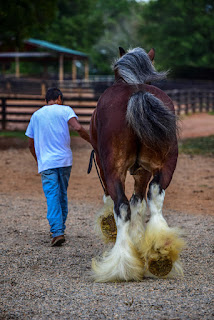 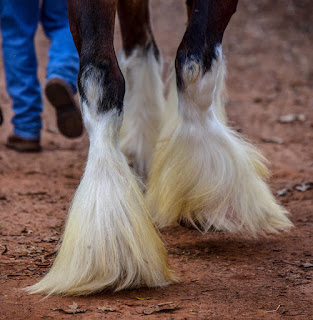 Zorra Highland Captain is a huge component of our foundation breeding program.  We were lucky to be able to acquire Captain from the Desharnais family also known as Freedom Clydesdales in Quebec, Canada.  Captain has a wealth of pedigree, being an SBH Pheonix son and out of Pendleberry Heather May an Ayton Perfection Grand-daughter.  But, any stallion can have famous parentage.  What we love about Captain is his offspring.  Captain is the sire of Willow Way Jolie (the 2011 World Champion Mare) and numerous other quality Clydesdales mares that are showing and winning in Canadian and US show arenas.  He is a beautiful stallion and we are overjoyed to bring him to the USA.   If you are interested in breeding to Captain, please contact Shannon Martin to discuss options.  Captain is available for live cover on our farm only. 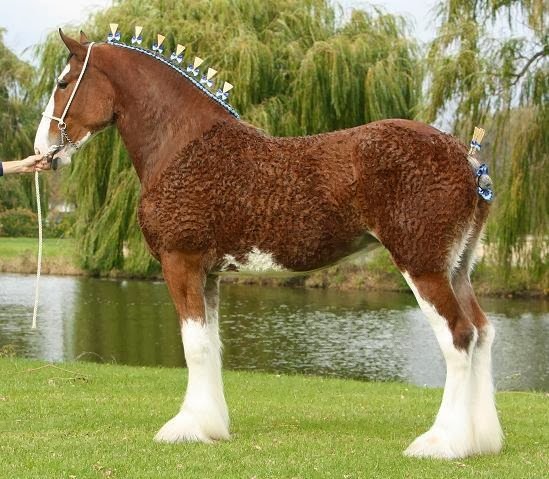 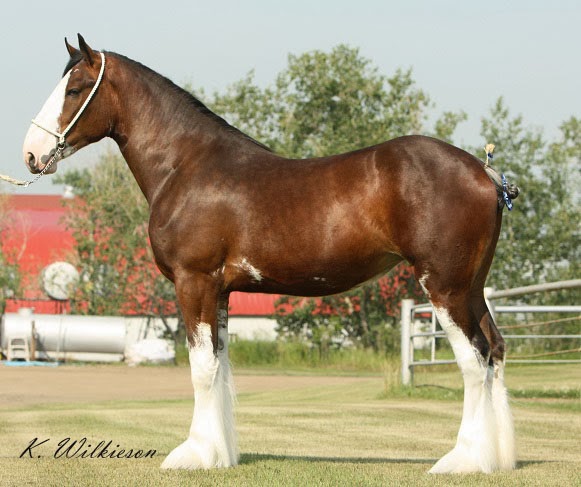 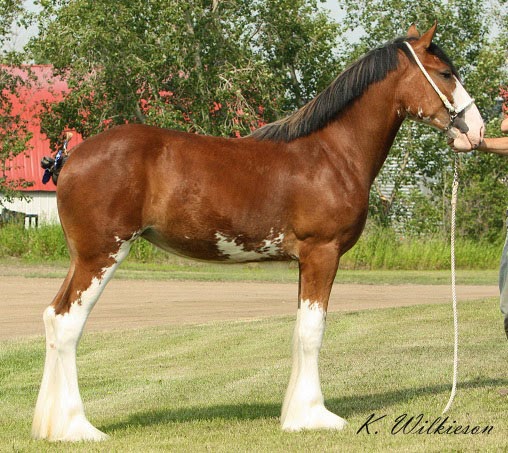 As you can see these offspring have never left WWC and are showing in their 6-up of Clydesdale mares and if that isn't a testament to quality and desirability I don't know what is. 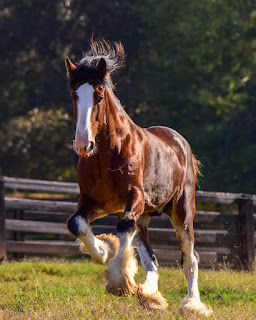 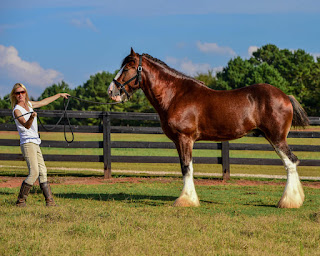 "Latch" is an amazing young stallion that is just beginning his career with us.  He reminds us so much of his father and also has many amazing qualities passed down to him from his amazing mother Cocklaw Valetta.  Valetta is a "one-of-a-kind" mare imported from Scotland and she is big and beautiful.  Latch has excellent large feet, beautiful silky hair and is put together in all the right places.  These recent photos were taken in our pastures here in GA.  Latch's first foal crop delivered everything we were hoping for.  Latch offspring are high-hocked, move tremendously well and have nice solid feet and beautiful silky hair.  He complimented each mare he was crossed on.  Latch might not be the biggest kid in the barn, but what he delivered was nothing less than exceptional.  His filly by our DJL Austin's Sharpay mare will be showing in 2019 and we have no doubt she will do well.

"This Bogton Barnaby son was born via Embryo transfer from the lovely Scottish import mare Cocklaw Valetta.  This colt is one humongous genetic package.  With daddy going back to Phesdo Heather a renowned Scottish mare and  Cocklaw Valetta a Collessie Cut Above daughter still owned by Jim Westbrook.  Latch's mommy has put some tremendous horses on the ground over the years including 2S Above's Highland Hallmark and 2S She's Exclusive Etta.  Etta sold at the 2S dispersal sale for $28,000.  Not only does this colt look handsome,  he has the sweetest temperament on the planet, but enough spit and fire to produce performance horses.   We are very excited to have him here at Classic City.  You can expect big things in the future from this colt."

And then sometimes you just get lucky! We have to keep pinching ourselves! Kayden is a new addition here at Classic City Clydesdales.  We were able to purchase this fine young stallion from Dan Holian after he exported this stallion prospect from Western Canada last year.  We didn't get him down here in time to really utilize the big guy in 2018, but 2019 will see this dark bay stallion crossed on a few strategic mares.  Kayden has it all, size, color, foot and beautiful silky hair.  Kayden is already measuring in at a barefoot 18h as a 3yr old.  He is out of a big bodied black stallion, making black offspring a probability for your black mares.  We will be offering him at stud to a few outside mares for the 2019 season.  If you are interested in shipping contact Shannon Martin for more details. 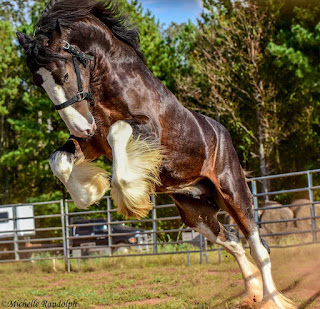 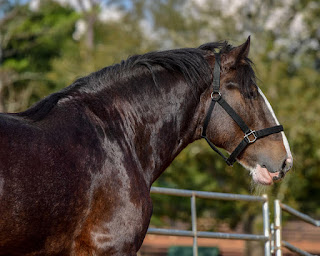 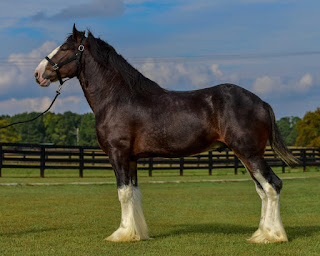 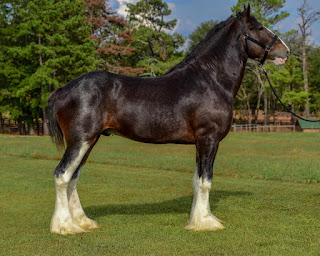 and THE FUTURE LOOKS BRIGHT!

Look how he shines!  2019 will be Luis' coming out year.  We hope to cross him on a couple of our big hitch mares.  Just look at those bottoms!  The quality is here with this colt and of course it should be with a pedigree like his.  It's hard to find Majestic blood this side of the Canadian border, but we've got it here.  If you are looking for humongous bottoms and gorgeous hair this Clydesdale Stallion is the real deal.
Luis did some showing as a yearling showing at the National Clydesdale Show in 2015 against a group almost 6 months older than him and placed well.  The judges were all very complimentary hoping to see him again as he grew.  He came home, did that growing and received Grand Champion Stallion honors at the GDHA Georgia National Fair over all breeds.   He's a looker!  Just see for yourself. 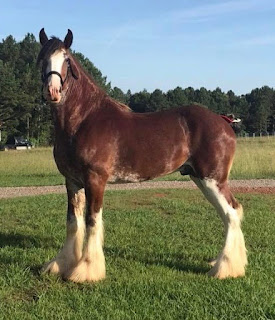 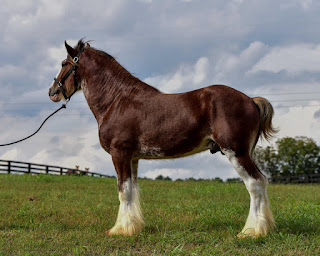 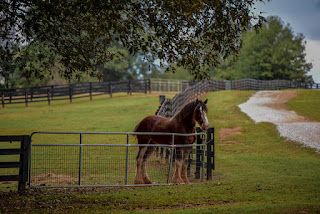 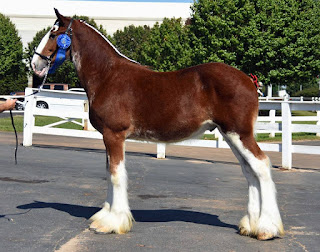 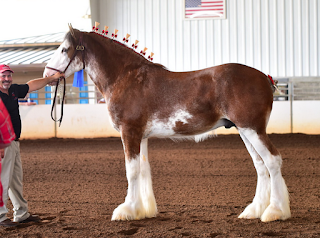 Peyton is an exciting young prospect from the impeccable breeding program of Jack and Michelle Parnell in ID.  He is a son of Gregglea Azar's Protege and Priest Lake Hannah Blue. He has incredible bone and foot with a beautiful heavy body and plenty of silky hair.  He compliments a number of our beautiful mares and we are very excited to announce his first filly foal (pictured below) Classic City Peyton's Liz Phair attended her first show in October and received first place in her class. We look forward to seeing her grow.
Peyton proved to be an easy breeder in 2019 at just 2yrs old.  He is gearing up for the 2020 season and will be offered to a small number of outside mares.